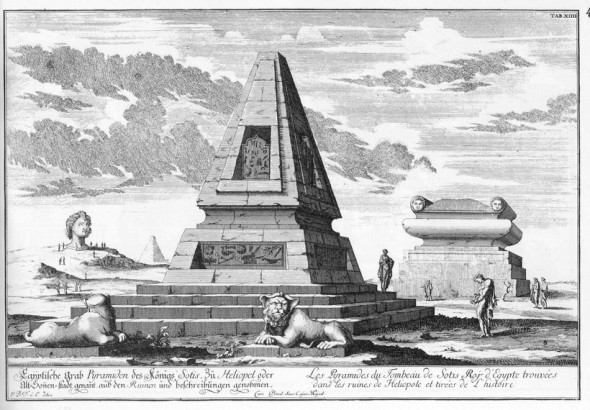 Almost three centuries ago, in 1721, the Austrian architect Fischer von Erlach published A Plan of Civil and Historical Architecture. This book, a supposed comparative analysis of the world’s architecture, contains a number of plates depicting a group of monuments such as the Giza Pyramids, and the buildings of still remote cultures like Chinese pavilions and landscapes alongside projects and buildings by Fischer von Erlach himself. On each plate, below the image, a bilingual caption shortly exposes von Erlach’s personal views on the represented buildings and projects.

By presenting both existing buildings, regardless of how accurate their representations are, and de facto fictional buildings in the same manner, Fischer consciously manipulated the notions of reality of the European population. As he wrote, his intention was “to please the eye of the amateur by some examples of different ways of building and to inspire artists to inventions rather than to inform the erudite”1.

Regardless of the reasons behind it, the fact remains that the ill-informed reality of a well-positioned individual came to shape the notions of a whole continent. For instance, Boullée designed his pyramids according to von Erlach’s imagery and Luigi Canonica used the plates as references for the Arena Civica di Brera in Milan. In the midst of the Enlightenment, the belief in science and in the press was at a historical high, not unlike during the current past twenty five years.

With the end of the cold war, a seemingly unified world based on free flow of goods, people and information emerged. This new world, lit by an ever-broadening technical and technological knowledge, suggested that truth finally was something palpable and objective. Data and image emerged as the currencies of the new world. This shift in the paradigm together with considerable technological advances and easy access to them gradually led us to a point when facts are created based on their representational and empathic values rather than on their accuracy. As a consequence, in a partially digitally driven life where alternative facts keep sprouting around us and the socio-political and economical structures become more and more abstract, it seems to be hardly possible to understand where the limits between fiction and reality lay.

The relation between fiction and architecture is of an intrinsic nature. Built or unbuilt, since the moment architecture starts to exist, fiction is there, present in the different imaginaries of what a project could be. From the first sensorial manipulations that gave birth to the basis of Occidental architecture to the way we represent it nowadays before and after it has been built, fiction is always there, hand in hand with architecture. Still, architecture does not escape the general climate of ambiguity as the limits of reality seem growingly elastic in the public discourse.

If we are to analyse the correlation between fiction and reality in architecture and its resonance in the wider socio-political and cultural context of the present, texts have the potential to become a radical instrument. The articulation of ideas and thoughts using precise sequences of words can be seen as a vaccination against the pervasive rule of images nowadays. Images, especially native digital images, are ubiquitous, reproduced continuously and seamlessly manipulated in a loop of processes that undermines their link with reality.2

On the other hand, the relation between texts and images is dialectical. In Vilem Flusser’s words, “Texts do not signify the world; they signify the images they tear up. Hence, to decode texts means to discover the images signified by them. In this way, texts are a metacode of images.”3

In this general conceptual and formal elasticity lies a potential which we wish to explore. The cycle CARTHA on The Limits of Fiction in Architecture will be articulated in two issues which aim to be complementary in content as well as in format. The first issue will consist only of texts while the second issue will consist only of images. As Fischer von Erlach did with his book A Plan of Civil and Historical Architecture we intend to, through the analysis and representation of architectural case studies, question the current relation of architecture with fiction and therefore with reality.

For this first issue, we call for contributions only and exclusively in the form of texts that build upon an example in architecture chosen by the contributor, a case study. The case study should be found at the intersection of the following four conditions: contemporary or historical and built or unbuilt. We are interested in contributions that expand on the question of how architecture operates with and within fiction and reality. The book by Fischer von Erlach, A Plan of Civil and Historical Architecture and its successive impact on Europe, can be seen as a case in point for this purpose in itself as well as in each one of the examples that the author conspicuously illustrated and commented.

There are multiple entries to fiction and architecture deploys a thousand-and-one facets. One could ask how certain myths have been built upon the over-idealization of their qualities; or query about how a fictional body of regulations inform buildings and cities; one may also try to sharpen one’s gaze to scan perceptual manipulations affecting geometry, colour, material and any other sensorial traits in built architecture; while another one may question how architectural representation nowadays has been instrumental in the positioning and ideological construct of some practices even before they had a substantial portfolio of built work; therefore, one could ask how much of the representation is intentionally fiction and if fiction pays better results than reality. Whether one asks these questions or a myriad of different ones, the fact is that the system of interdependencies between fiction and reality lay at the very core of architecture.

Contributors are invited to choose a case study, while looking into these or other questions, within or beyond disciplinary boundaries, elaborate on The Limits of Fiction in Architecture.

The Limits of Fiction in Architecture, The Text Issue will be published in August 2017.

Contributions should be electronically sent to CARTHA until 15.06.2017. Accepted proposals will then be prepared for publishing by the author and the editorial board together.

Contributions must be written in English and submitted in *.doc format.

CARTHA does not buy intellectual property rights for the material appearing in the magazine. We suggest contributors to publish their work under Creative Commons licenses.

Check the official call for papers on CARTHA.

Cover picture: Illustration from the book „A Plan of Civil and His- torical Architecture“ by Fischer von Erlach

2“In our digital ecosys- tem, images detach them- selves from their creators and their original locations in the world, thus beco- ming the context for other images. This new asocia- tive logic based on chains of images puts forward the possibility of an universal language capable of overri- ding the broken English of Internet captions. The Int- roduction of digital proces- ses has also weakened the historical process of photo- graphy as an indexical link with reality” Vasallo, Jesús, “Seamless:Digital collage and dirty realism in Ar- chitecture”, Log 39, 2017, page 48

3 Flusser, Vilém Towards a Philosophy of Photography, 1983. 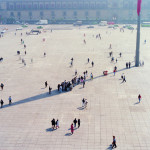