On January 20, 2017, Donald J. Trump will take the oath of office as the 45th president of the United States. In the wake of a vitriolic, often disturbing campaign, Trump’s first appeal for unity took the form of a reiterated pledge to revitalize America’s infrastructure: “We are going to fix our inner cities and rebuild our highways, bridges, tunnels, airports, schools, hospitals. We’re going to rebuild our infrastructure, which will become, by the way, second to none. And we will put millions of our people to work as we rebuild it.” Whether committed policy proposal or rhetorical bargaining chip, this invocation of building forces the discipline of architecture into a newly politicized light. Regardless of political persuasion, architects and critics must define not only their own positions and practices in relation to this new political reality but also the very possibility of architecture in the age of Trump.

Log invites submissions of up to 500 words on the future of architecture, infrastructure, and criticism to be published in Log 39 (Winter 2017).

Go to the official call page. 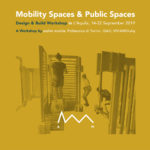