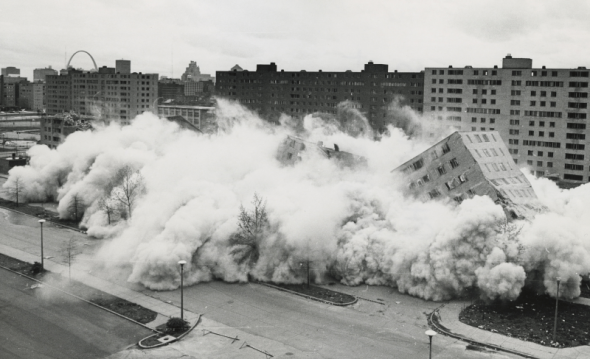 Whatever the pleasures and prodigious efforts associated with erecting architecture, the art of causing it to disappear can be equally compelling or satisfying.

The subtraction of buildings is as important as the making of buildings […]. As marketers, financial experts, planners, and politicians develop buildings, they also detonate buildings and landscapes. Financial industries surround seemingly static and durable structures […] with a volatile balloon of inflating and deflating value. Development encourages migrations into and away from cities, causing rapid growth and rapid decline. Buildings themselves even cause destruction not only because they replace previous buildings, but also because they can […] destroy their surroundings.

In the wake of recent crises, catastrophes, and population shifts, as buildings radiate negativity, a significant portion of the heavy machinery used to construct buildings is now busy taking them apart. Ruin and decay has its own pornography. Demolition has its own TV shows. Disassembly and teardown are now popular art forms. […]

While a subtraction economy already exists, it is still perceived as something that does not exist – as something negative and therefore unknowable or to be avoided. Even when subtraction is planned, it is often treated as the disposal of an accidental or unintended consequence […]. Subtraction is erasure rather than exchange – hiding an error rather than menaging an ecology. […]

Architects and urbanists are conoisseurs of object form expressed with shape, outline, and geometry, and the design of object form usually results in the addition of building. But a subtraction economy that removes building must also deploy active forms. Subtraction is not simply absence, but a moment in a set of exchanges and advances, aggressions and attritions that are part of most active organizations. […]

Building subtraction, as a major industry and design protocol, is a lucrative emergent global enterprise, a source of employment, and a political instrument. […] With its own aesthetic pleasures and an expanded repertoire of form making, subtraction also offers a redoubled territory for design. 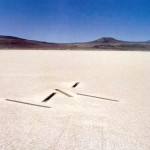