This post belongs to a series of interviews aimed at investigating the ideas that stand behind a selection of editorial projects dedicated to architecture and based on an experimental use of social networks such as Tumblr, Facebook and Instagram. As summarized by the title of this cycle, “beyond blogging”, we believe that the critical use of social tools is leading architectural communication to a new and promising fronteer: one in which the specific features of digital media – fast reading, relevance of the image, easiness of association, informality, viral propagation, etc. – are successfully capitalized to create inspiring architectural archives organized around specific topics, which can efficiently provide useful references for design and research tasks. Even more interestingly, the greatest part of what is published in these “one-man-webzines” is not produced by their editors (who therefore have little or no direct interest in the diffusion of their posts), but is rather the result of independent and unpaid investigations, autonomously conduced on both paper and digital sources. From this point of view, these editorial projects have the great merit of being constantly enriching the web with diverse and previously unpublished architectural references, coming from both the present and the far-away past. Their aim, therefore, is not to keep their readers updated, but to produce a connotative kind of architectural knowledge: one in which it is not the single images that count, but the relations that can be established among them. Our fifth interviewee is Daniel Tudor Munteanu, editor of OfHouses. DTF

Can you introduce yourself? (how old are you? What did you study? What did/do you do?)
My name is Daniel Tudor Munteanu. I am based in Suceava, Romania where I run a small architecture and urban planning office together with my wife Ana. I studied in Romania and The Netherlands and recently I completed postgraduate courses at The Berlage Institute in Delft and at FAUP in Porto. This year I had exhibited at the 5th ”Urbanism\Architecture Bi-city Biennale” in Shenzhen and I contributed to “OfficeUS”, the U.S. Pavilion for the 14th Venice Architecture Biennale. My texts and graphic essays were published in San Rocco, Volume, Log and Oase.

Can you explain in what does your editorial activity consist?
OfHouses is a daily updated collection of old forgotten houses.

How long have you been dedicating yourself to your editorial activity?
OfHouses was born on March 27, 2014.

Does your editorial activity have effects on your profession?
Of course. Although difficult time management is an obvious shortcoming, I feel that the continuous research effort for OfHouses already leaves unexpected traces in my designs. 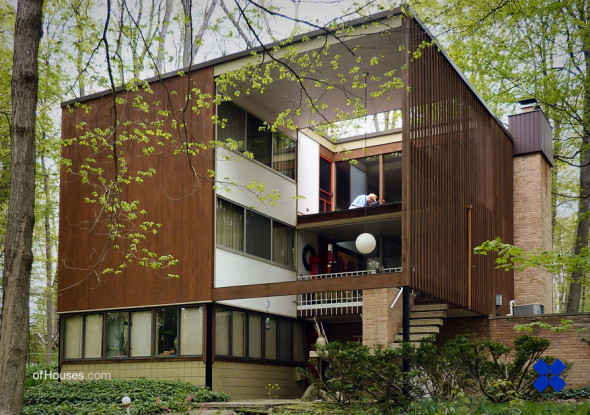 How much time do you dedicate, on average, to your editorial activity?
1 day/week. Everything is prepared well in advance. First I research a project, collecting and studying all the available material. This is then sorted out and I try to extract the best possible slides illustrating the project. Also, I try not to mirror the most popular and easily available images. Our slides are often nowhere to be found elsewhere on the web.

Where and how do you look for the material you publish?
The first research happens online, on both free and paid websites (such as the Domus Archive). Accessing unconventional resources such as Panoramio or Flickr is also a great way to find candid images that sometimes are better than the professional architecture photography. Then I go to my personal (and quite extensive) library of architecture books and magazines. A lot of friends also send me scans and personal photos.

Have you developed and consolidated some personal publishing tehcnique?
OfHouses doesn’t reblog.
All the content is original and carefully managed. Consistency is extremely important for me. All the images have the same size, either in portrait or landscape format. Instead of adapting to a particular screen size, I had chosen the paper size aspect ratio of 1:√2. More than that, every image is retouched in Photoshop, adjusted to our particular format and calibrated for the contrast and the focus. All the captions are in the same consistent format: architect /// project name /// location /// year, with full credits for every photo.
I also create posters for special selections and prepare funny celebration images for important occasions, such as reaching another milestone.

If you use different media (fb/twitter/instagram/pinterest) how do you relate them?
Every social network is different. Generally, I publish less but I try to reach a broader and more relevant audience on each platform. On Facebook I publish one image/day, geotagged and with additional material posted in the comments. On Tumblr and Flickr I publish a more extensive photoset once every three days. I gave up on Pinterest, which is a social network I still don’t understand, but I’m gradually getting more and more satisfied with Ello

The links/projects/images you share are usually actual or they belong to the past?
OfHouses uncovers gems hidden in the past. I only publish built projects that have reached a certain history of their own.

Do you comment what you publish?
I rarely do, but my guests and I write short introductions for special selections of projects.
In the beginning I uploaded unrelated projects, based only on my preferences, but I got bored with it pretty quickly. Then I began to group 7 houses in a week long selection, under a special theme – an architect (Ruy Ohtake, Décio Tozzi and Paul Rudolph) or a group of architects (L.A. School). After that I started to invite architects, critics and bloggers to be guest curators of such a selection of 7 houses. Up to this day, there have been 12 guest curators from 3 continents. I’m very happy with this format because, along with my audience, I also discover and learn a lot.

What is the reason that makes you publish?
At first it was simply a reaction to the diarrhea of ‘interesting’, albeit uncaptioned and unrelated images that flood all the social networks. I thought I can do better. Then, because of the unbelievable feedback I received, I continued to publish every day.
Social media is only the first step for OfHouses. When the collection will reach the necessary critical mass, a proper website will be set up. After that, the plan is to publish a very special paper magazine dedicated to only one house / issue.

Who do you want to communicate with, when you publish?
I want to communicate with whoever is interested in good architecture, beyond all the fashions and current trends. OfHouses is not just another blog with sexy images. I guess this naturally attracts a more mature and well educated audience, composed mainly of professionals.

What value do you give to the likes/retweets you receive?
A lot of value actually, because the more engaged is the public, the broader audience you’ll be able to reach. It’s the number one rule of all social networks. But of course, it’s also a way to receive feedback – all too often what I thought will be a very popular post is completely ignored, and vice versa.

Is your editorial activity based on one or more main themes, or is it made of punctual selections not necessarily related?
The rule of thumb is: forgotten houses built more than 20 years ago.

Did you discover/learn something, while developing your editorial activity?
I learned immensely and I discovered a lot of beautiful projects and extremely good architects I had never heard of before.

Do you care that what you publish can influence the architects that follow you?
I do, but I don’t give too much thought on the subject.

Do you think that social networks can change the way in which we design?
Absolutely not. Architecture is fundamentally the same as it was 500 years ago, only richer in terms of accumulated knowledge and available construction materials and techniques.

What is, in your opinion, the role of social networks, in the wider context of architectural communication?
Communication has never been so easy. The issue is only what do you want to communicate.

What is your point of view on the actual state of paper architecture magazines?
I am an avid reader of architecture books and magazines. The vast majority of glossy magazines simply replicate on paper what Archdaily does on the web, only with more annoying advertising. They serve their sponsors and could not care less about the readers. In Italy, the unsold copies of Domus and Casabella are not even returned to the publisher. The vendors only return the covers and throw away the body of the magazine. The content had become disposable. On the other hand, there are some unbelievable magazines like San Rocco, Oase, Clog, Volume or Log. I frequently contribute to all of them. I may be subjective, but I believe these kinds of text focused magazines are the only ones worth cutting trees for. 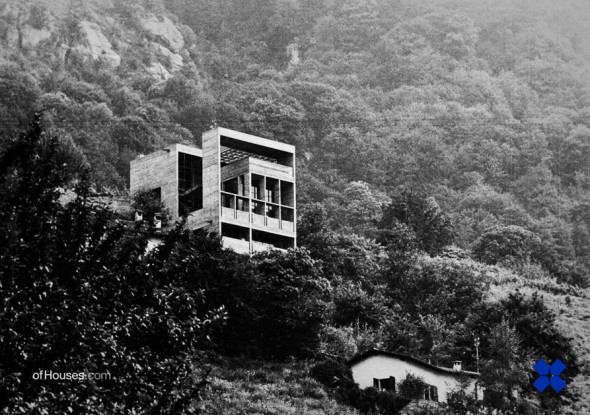 What are your main paper sources of information, regarding architecture?
Architecture books, mainly monographs, and older magazines.

What are your main web sources of information, regarding architecture?
There are a myriad of good blogs and websites and so little space to name them all: Uncube, Socks Studio, Arqueologia del Futuro, HIC Arquitectura, Arquitectura Beta, Afasia Arq. There are also the online archives of Quaderns, WBW or Domus. 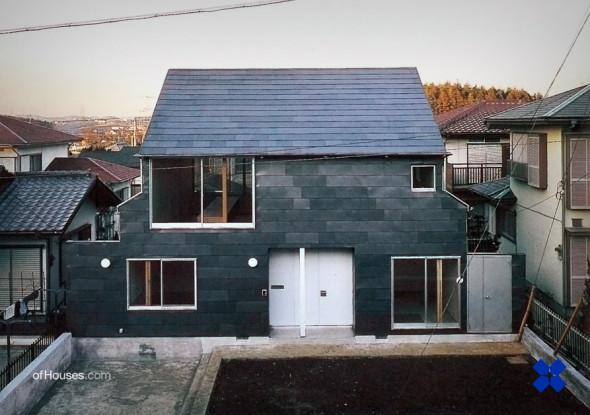 Can you choose 5 images, among all that you have shared until now, that are particularly relevant to you?

Fig. 1 – OfHouses #074. This is one of the projects that surprised me with the number of likes and shares, as I totally hated it at first. It is the result of a joint venture between an architect, a sculptor and an engineer. It was built by spraying fast setting concrete over a steel mesh that was folded in situ as a giant wire sculpture. No traditional drawings were made and the only guidelines were a few clay models. Greg Lynn, the editor of the seminal “Folding in Architecture” issue of AD, was three years old at the time this house was constructed.

Fig. 2 – OfHouses #066. Despite of being listed as a national landmark, this little Mid-Century modern gem is now totally forgotten. It is Bauhausian with a more delicate touch. I still don’t know much about Balogh’s activity, nor about the so called “Ann Arbor School”, a term used to describe the work of a number of Michigander modernist architects practicing in the 50s.

Fig. 3 – OfHouses #029. No one knows David Muñoz outside of Mexico. Thanks to the generosity of his son Mauricio Muñoz Anchondo, I was able to publish decent size photographs and drawings of this amazing house. It looks as it was designed today, although it was built almost half a century ago.

Fig. 4 – OfHouses #010. I found this by browsing an old issue of the Swiss magazine “(Das) Werk”. It is a brutalist masterpiece by the little known Ticinese architect Ivano Gianola. At the time I published this no other images of it were available online. I am surprised to find that in the meantime the house was put on the market for 1,5 million Swiss Francs and candid images of its current state can be found from the realtors.

Fig. 5 – OfHouses #133. Sakamoto’s houses are radical experiments often disguised beneath the image of the generic Japanese town house. Here, the wooden structure of the slate covered facade is exposed by the misplaced and oversized openings. The result is both familiar and alien, bringing to mind the first houses of Kazuo Shinohara. Again, very little information was available online and Sakamoto’s work is still unfamiliar to many architects outside of his native Japan. 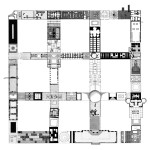