This post belongs to a series of interviews aimed at investigating the ideas that stand behind a selection of editorial projects dedicated to architecture and based on an experimental use of social networks such as Tumblr, Facebook and Instagram. As summarized by the title of this cycle, “beyond blogging”, we believe that the critical use of social tools is leading architectural communication to a new and promising fronteer: one in which the specific features of digital media – fast reading, relevance of the image, easiness of association, informality, viral propagation, etc. – are successfully capitalized to create inspiring architectural archives organized around specific topics, which can efficiently provide useful references for design and research tasks. Even more interestingly, the greatest part of what is published in these “one-man-webzines” is not produced by their editors (who therefore have little or no direct interest in the diffusion of their posts), but is rather the result of independent and unpaid investigations, autonomously conduced on both paper and digital sources. From this point of view, these editorial projects have the great merit of being constantly enriching the web with diverse and previously unpublished architectural references, coming from both the present and the far-away past. Their aim, therefore, is not to keep their readers updated, but to produce a connotative kind of architectural knowledge: one in which it is not the single images that count, but the relations that can be established among them. Our third interviewee is Andrew Kovacs, editor of Archive of Affinities. DTF & GB 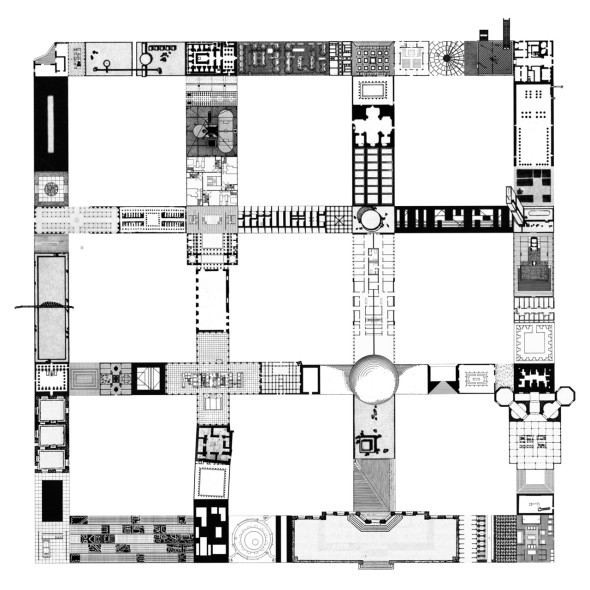 Can you introduce yourself? (how old are you? What did you study? What did/do you do?)
My name is Andrew Kovacs. I am 30 years old and I was born in Chicago, Illinois but I now live in LA. I teach in the Architecture and Urban Design program at UCLA. I have a small architecture studio and I produce Archive of Affinities.  I studied architecture at Syracuse University (B. Arch), the Architecture Association, and Princeton University (M. Arch).

Does your editorial activity have effects on your profession?
My work and the production of Archive of Affinities are closely linked together where both research and production feed into each other. At times I will deliberately search out architectural works that pertain to a project I am working on. At other times architectural works that I come across by chance while sifting through history’s trash can will spark or influence a new project. 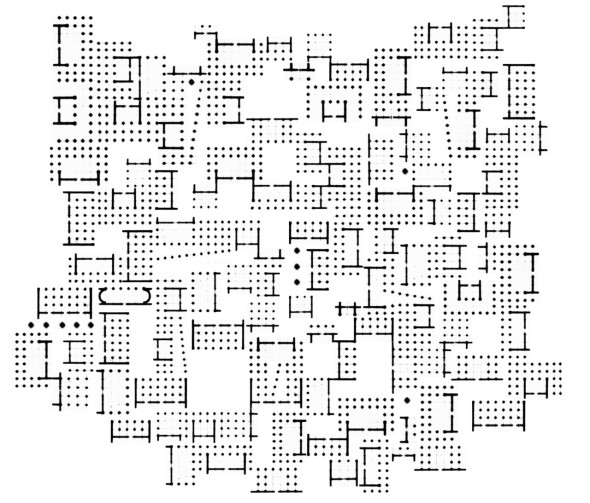 Where and how do you look for the material you publish?
I go through books, journals, magazines, pamphlets and exhibition catalogs, etc. and search for things that are wonderful. At this moment in time I have posted around 3,000 images.

Have you developed and consolidated some personal publishing tehcnique?
Archive of Affinities is curated, but curated on the fly almost as a kind of speed curating. From a recent batch of “acquisitions”, I scan the images and I aggregate them by loose affiliations, formal alliances, fortuitous pairings, strange marriages and odd similarities. For me, the speed allows for a much more nimble and malleable form of display, one which ultimately provokes new readings and alternative portrayals of overlooked works of architecture.

Fig. 3 Elevation for a slab

Who do you want to communicate with, when you publish?
I would like to communicate with architects, people interested in architecture and ultimately the wider public. The discipline of architecture is a broad endeavor rather than a narrow one. Our field can have a powerful impact in shaping our world at all scales and sizes. I want to communicate that the built world that we inhabit does not need to be boring or banal and that as architects and really, as people, we can change, design and control the space we inhabit rather than being controlled by the space around us.

Did you discover/learn something, while developing your editorial activity?
Through sifting, sorting, collecting and selecting thousands of images I have not only developed, but refined my own personal tastes and sensibilities. The more images I look at – good, bad, or ugly – the more I learn.  Archive of Affinities is a tool for me to think through and develop my own architectural ideas.

Do you care that what you publish can influence the architects that follow you?
Yes, of course. My goal is to expand the field of architecture and widen its visibility to the greater public.

Do you think that social networks can change the way in which we design?
Absolutely. Social networks have certainly increased the speed in which we communicate about architecture and design. Yet, I think the actual influence of these networks on design and the production of architecture itself has not moved beyond that of traditional means of publishing such as magazines. The field of architecture at the end of the day is conservative and lethargic and often reluctant to easily accept change.

What is your point of view on the actual state of paper architecture magazines?
I spend a lot of time reading architecture magazines from the past. I think that many of the current magazines all have the same commodified content with a lack of direction and purpose, other than showing off the latest and greatest of shiny banality and glossy mediocrity. 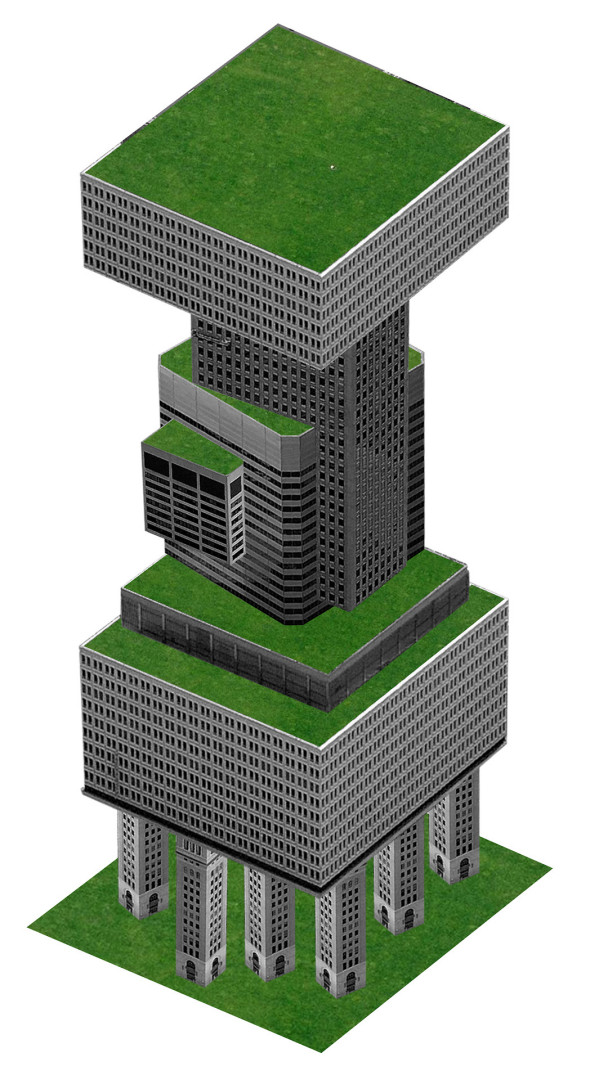 Fig. 4 Proposal for an office building

What are your main paper sources of information, regarding architecture?
I think of the current print architectural sources, the ones I find the most interesting are Project Journal, Clog, San Rocco, Mas Context, and Pidgin. 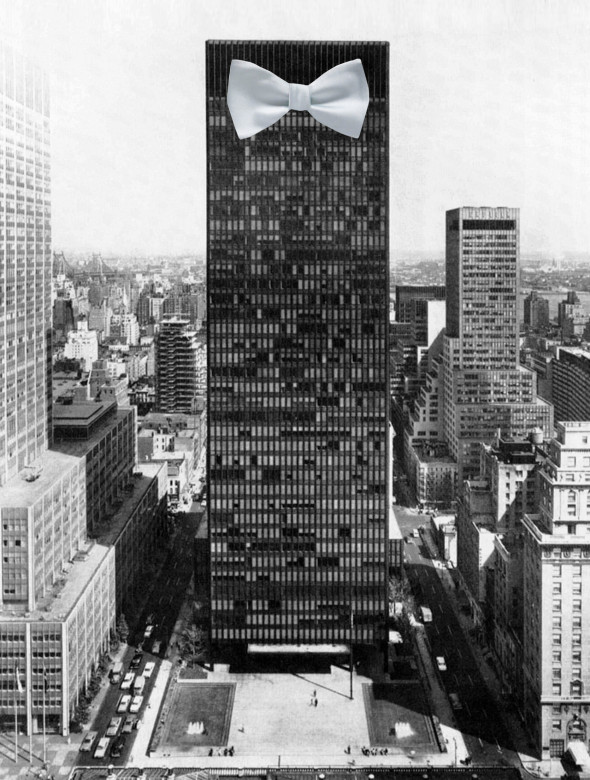 Can you choose 5 images, among all that you have shared until now, that are particularly relevant to you?

Fig. 1 – The 9 Square Grid is a such a trope in architectural education. This project aims to design a 9 Square Grid from parts and fragments of plans on Archive of Affinities. If one adds and aggregates enough floor plans together the result is a proposal that oscillates between a small work of urbanism and a large work of architecture with the aim of a new type of collective and common space.

Fig. 2 – Plan for a porch 005 (homage to Durand) takes J.N.L Durand’s catalog of porches from 1802 and rather than looking at this collection as individual projects to be compared and contrasted, it looks at Durand’s porches as a collection that is to be assembled. As architects, we take on the issue of precedent as being something that is sacred. For me, precedent is not precious or an object to be revered, but rather something that is to be used, altered, and manipulated into something new that simultaneously references the original precedent but also moves away from it.

Fig. 3 – Elevation for a slab is a project that takes fragments and parts from discarded elevations posted on Archive of Affinities and recasts them into a new proposal for architecture. Elevations are scaled, cut up and added through a logic of formal contiguity.

Fig. 4 – Proposal for an office building is made up of parts of generic buildings that is recomposed through stacking and piling into a proposal for generic architecture. The ambition is too look at the generic as a mode of dumb and raw formalism.

Fig. 5 – Architecture is such a conservative field. Perhaps the best way to loosen it up might very well be to add a bow tie to it. In Formal Architecture an everyday object is made colossal as a proposed addition and accessory to the iconic Seagram Building.

3 risposte a “Beyond blogging | Archive of Affinities”