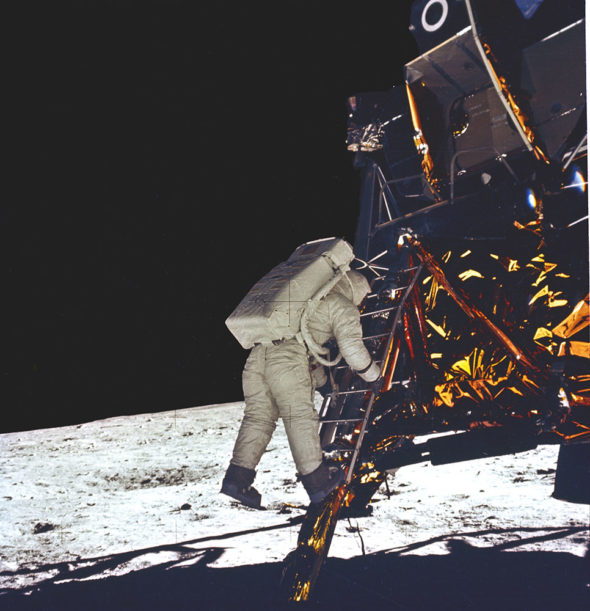 Astronaut Aldrin takes his first step onto the surface of the Moon. 21 July 1969. NASA Image and Video Library.

«But why, some say, the moon? Why choose this as our goal? […] We choose to go to the Moon in this decade and do the other things, not because they are easy, but because they are hard, because that goal will serve to organize and measure the best of our energies and skills, because that challenge is one that we are willing to accept, one we are unwilling to postpone, and one we intend to win, and the others, too.»

On September 12, 1962, the President of the United States of America, John Fitzgerald Kennedy, explained this choice at Rice Stadium in Houston, Texas, during a speech delivered to persuade Americans to support the Apollo program.
Apollo’s genesis is a longer account than JFK presidency; it represents the output of an effort that began in 1950 when the US government formed the Army Ballistic Missile Agency. Mercury Project (1958-1963, contemporary to the birth of NASA) and Gemini Project (1961-1966) are the following main stages that led mankind to the Moon.
The protagonists of that epos are a huge number of men and women whose efforts have been concentrated for many years, in every stage of the program, towards a unique goal: the conquest of the Moon, which also means victory in the great space race against USSR.

Apollo 11 represents the absolute summit of that adventure, as the attention that the whole world dedicated to the mission between 16 and 24 July 1969 was a unicum that would no longer be equalled, same as the feelings that united mankind for one brief moment, in which everyone felt American, connected to one another in sharing the wonder of discovery. 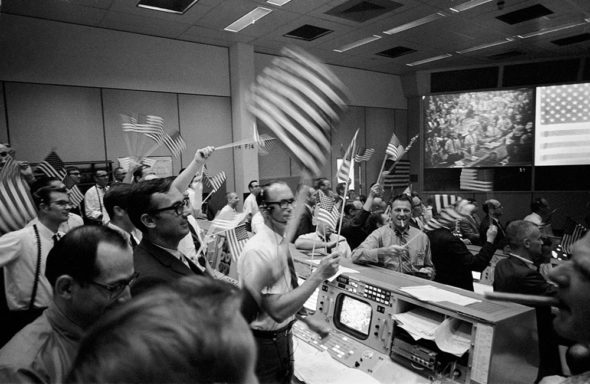 Architecture and design share with the Apollo program a sort of methodological and evocative platform which is characterized by great efficacy. It is the tool of the “project”, intended as that sort of logical process that is able to transform ideas into reality. The success of Apollo program is clearly the outcome of a precise long-term project, a project of unbelievably high level of imagination and construction. Architecture and design embody this kind of strength and, through the common denominator of the project, they are not just pushing the boundaries of the disciplines themselves, but are more generally challenging the forces that, in all ages, fight any type of change – first of all, inside men’s mind. An effort as the one we can see in the attempt made by Adriano Olivetti, against any convention, to create a new economic and social model for his company and his community, together with many visionary creatives.
Architecture and design oblige mankind to face off new ideas, new facts, new objects, in order to create a better environment, a better life. They are strongly identified with their capability to design as a way of thinking, acting on reality and ultimately create radical change in the world, whatever the scale of the project is; to build a rocket heading to the Moon or to design an innovative building with new and controversial instruments in order to trace a new scenario, same as Frank Gehry did with Walt Disney Concert Hall.
Project actions are very often the result of a collective and anonymous effort, rather than of a few specific authors. The city represents one of the greatest achievements in the history of mankind and it is a collective fact, both spontaneous and both the result of a precise project, also concerning the technological progress.
But in any case, the city, the civitas, is first of all an idea. This helps us to keep in mind that beyond the many ways in which is possible to develop a great result, the most important thing is the meaning of the mission, rather than the form in which it appears during its development and after its completion.

Seen from the perspective of communication and narration, nothing of this sort could have been achieved without the use of wide and various techniques and escamotage. A reflection around the theme of Apollo 11 nowadays should include a critique of the complex mechanisms that allowed to put in place the biggest show of the century.
For example, pop culture played a vital role in giving life and color to the adventure: a wacky but popular example is the use of Bowie’s dramatic song Space Oddity describing an astronaut demise, which was bizarrely used as background theme for the launch of Apollo on CNN.
Also, we should reflect on how these escamotage can and are used today: it is known that Isis has put together one of the most successful examples of engagement campaign, by smartly using all the communication channels at its disposal, even social networks.
How has communication design impacted the popularity of Apollo 11? What are the main differences with today’s media and approaches? What do we expect to face in the next years?

Considering Apollo 11 as the archetype of human achievements we look at it in terms of glory, power, propensity to dream. At the same time, Apollo 11, like any other great event, is the bearer of many outcome of dichotomous interpretation. In fact, it also represents one of the peaks of the Cold War and is the result of the same policies that lead to Vietnam War and much more. It is simply not correct to look at any event in isolation from its historical context. In what terms did the seed of the Apollo program develop in the fifty years that preceded it?
And in what context have we seen its effects develop in the fifty years that have followed? Someone could think at it as the start of an age of never-realized expectations. It took sixty-six years for humans to launch the first controlled flight to the moon but, in the following fifty years, progress in this matter remained – more or less – still.
But what about the next fifty years from now? When re-thinking it today, the most important milestone of the space race cannot be read in isolation from our planet’s current issues. Was Apollo 11 the first step to ensure the survival of human species on another planet or the start of human devastating influence on other celestial bodies? 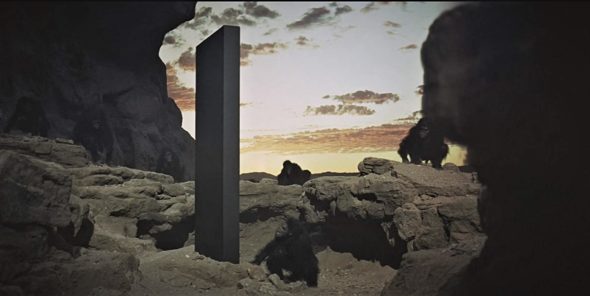 Frame of the movie 2001: A Space Odyssey by Stanley Kubrick.

Authors should ask themselves what kind of link is possible to establish between Apollo 11 and architecture/design practices. What does Apollo 11 inspire before, during and after its performance? How can we measure its impact on mankind – and more specifically on architecture and design – related to both levels of ideals and materiality?
More generally, authors are invited to think about how architecture/design masterpieces and trends have been influenced by events of such importance or, on the contrary, how architecture/design movements and projects have been the trigger of a great evolution for mankind.

Apollo 11 undoubtedly represents a symbol, the sign of a dream that becomes reality, becomes history. It is not only due to the enormity of the challenge or to the successful conclusion, or at least not just that. The conviction in the path toward the conquest has meant that already during the development of the whole project a feeling of strength and shared responsibility was established. Apollo 11 has seen mankind transcend the individual, his own physical humanity, towards a spiritual community.
The narrative construction of the adventure has been fundamental to consolidate the consciousness of its result. The reportages – along almost all the main stages of the space race, included some Apollo’s mission – written by Oriana Fallaci for L’Europeo magazine are examples of the possibility of transcending the facts towards the epic literature. She perfectly represented the spirit of that moment. 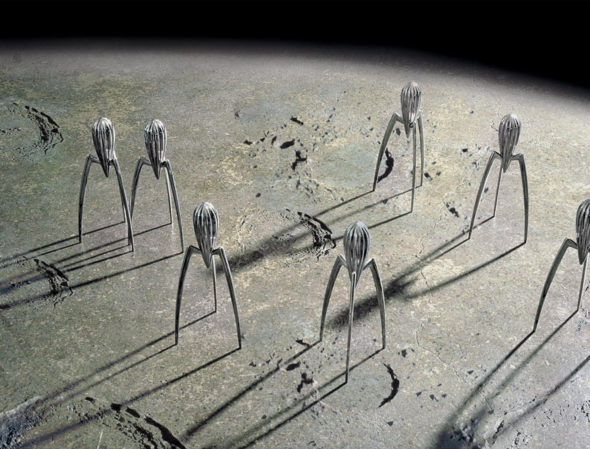 Celebratory image of the 50th anniversary of Apollo 11 mission. Shared by Alessi on Instagram.

«I believe that this nation should commit itself to achieving the goal, before this decade is out, of landing a man on the Moon and returning him safely to the Earth. No single space project in this period will be more impressive to mankind, or more important in the long-range exploration of space; and none will be so difficult or expensive to accomplish.» John F. Kennedy expressed to the Congress his resolution to focus the United States’ efforts towards an incredibly ambitious goal. Today we feel close to that spirit as the experiment of Quinta Colonna starts. The reflection on this theme – Apollo 11 – is the perfect opening for this shared adventure, to which we are fully committed and for which we are going to work with passion and effort.

With respect to all these ideas mentioned, and far beyond these few references, it is now up to potential authors to identify their own point of view, which we are thrilled to receive.

Abstract– deadline September 22, 2019
Submit 100 words which better describe the matter you want to discuss and the kind of material that you will produce; also add 5 keywords and a short bio in 30 words for each author (that will be eventually included in the publication).
If necessary, please attach at least 2 pictures.
Email to submissions@quintacolonna.eu.