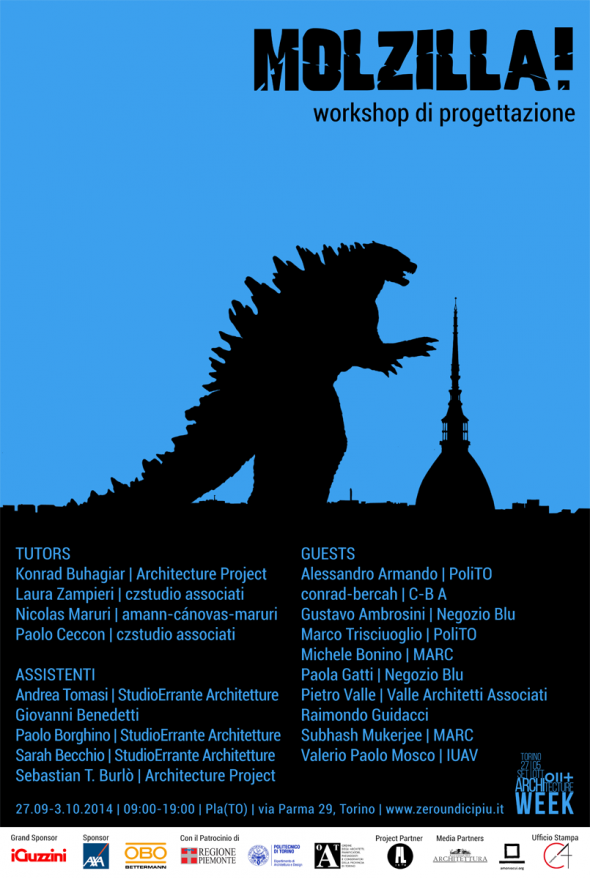 Description
One-week design workshop for students and graduates of any nationality. The workshop will focus on the production of feasible and sustainable design proposals for the reuse and transformation of abandoned areas and buildings in the immediate vicinity of the Mole Antonelliana, in the center of Turin. Along with the educational activities, the students will be offered a series of lectures by the workshop’s tutors. The experience will be organized along the same lines of another workshop previously organized by Zeroundicipiù, Unplugged, with work groups including a maximum of six students each, monitored by four architects-tutors.

Goals
The theoretical and design investigation developed during the workshop will mainly involve the densification of the built fabric as a strategy for city planning; historical layering as a design strategy for urban landscape; reuse as an architectural design strategy.

On December 2008, the City of Turin auctioned off a two-storey building located in via Riberi immediately behind the Mole Antonelliana, the city’s landmark monument, in the city center. At the time the small building was indexed in a particular section (Chapter 25) of the city’s Master Plan that defined the area surrounding the Mole as a “study area” and as such submitted it to specific urban guidelines including the creation of a new pedestrian square behind the Mole Antonelliana itself. But, since the creation of the square would have entailed the demolition of the above mentioned building that the City intended to auction off, the administration decided to introduce a new zoning variance that, approved in 2009, established that Chapter 25’s constraints were no longer applicable to the building in via Riberi so that it could be demolished and replaced by a four-storey residential building on the same plot. The building’s height would be later brought to seven floors by a further zoning variance presented in October 2010 with the support of positive opinions by the Superintendency, the local district’s administration and the Province of Turin.

Although the number of floors indicated by the second zoning variance was compatible with that of the surrounding housing, the local community found a taller building in via Riberi unacceptable and in May 2011 promoted the “Save the Mole” committee to develop a wide-ranging communication action to prevent the City of Turin from adopting the document. The Committee proceeded to collect signatures, report the case to the Ministry for Culture, organize a petition and present a complaint to the Public Prosecutor’s Office about the possible irregularities in the procedure. To support such actions, the Committee specifically used rendered images in order to show how the new building’s mass would have blocked precious views the city’s landmark.

The impact of those images was such that it unleashed a short but intense storm: both paper and online press harshly criticized the City Council’s policy, and, to substantiate the cliché of the monster that would hide the Mole, made abudant use of photo-montages with skilfuls view that showed a bulky and unsightly yellow building caught in the act of disfiguring the urban landscape of one of the city center’s most visited areas. The action developed by the “Save the Mole” Committee was successful: while the local district’s administration decided to review its decision on the issue, in July 2011 the Superintendency withdrew the authorization it had granted the year before, and even started a procedure for the “indirect protection” of the entire area that would make its buildings “temporary unalterable” as a “precautionary measure”.

We think the case of the via Riberi building is an example of the unbridgeable gap that often separates designers, citizens and superintendencies, and as such reflects at least four relevant issues that relate to the perception, protection and design of the urban landscape. These are:

I. The importance of urban landscape in collective imagination
The use of effective photo-montages and slogans, rather than arguments about mostly correct guidelines and urban planning policies, was especially instrumental in getting the “Save the Mole” Committee to achieve its goal of raising awareness and finally stopping the authorisation process.

II. The persistence of preconceived ideas about the city’s form and image
The decision to remove all buildings from behind the Mole in order to create a small square should not be considered unassailable only because it was included in the 1995 Master Plan ‒ in fact, it should be possible to review it based on considerations related to the image, form and use of the urban spaces that surround the monument.

III. Architecture is not expected to solve problems
While the possible introduction of a new building in the city center was aprioristically considered as an evil to be avoided rather than an opportunity to improve the qualities of the context, that response also revealed a prejudice towards architecture and its perceived failure to address this kind of issues.

IV. The Mole Antonelliana’s cumbersome role in the collective imagination of Turin
This is not the first time that the image of the celebrated landmark is used as a political weapon: an equally recent protest organized by the committee “Non grattiamo il cielo di Torino” [“Let’s not scrape the sky of Turin”] relied on sometimes misleading photo-montages in its successful attempt to keep the height of the then under construction Intesa-San Paolo tower (located in another city sector) just below the imaginary threshold of 167.5 meters, the Mole’s height at the pinnacle.

For all of these reasons, and to react against such responses, the association Zeroundicipiù launches the MOLZILLA! design workshop to produce feasible proposals for the reuse and transformation of abandoned or underused spaces and buildings in the immediate vicinity of the Mole Antonelliana, including the above mentioned building in via Riberi.

The MOLZILLA! workshop mainly intends to show how the problems generated by the inevitable clash of different approaches to the same place may (must) find a solution at a design level even before than in terms of guidelines.

The participants will work in groups of maximum six people, each monitored by a tutor and an assistant. Each group will be assigned a different plot and program within the same design area. The work method will be defined by the four tutors independently. At the end of the workshop, each group is expected to have defined a proposal that might coherently and innovatively solve the issues raised by the assigned program and site. The feasibility of the design proposals will be particularly assessed in view of their official submission to the City of Turin. The study area is in the center of Turin, and its borders are via Sant’Ottavio, via Verdi and via Rossini, and corso San Maurizio. The series of four lectures by as many tutors organized during the workshop will address and explore the architectural issues related to the workshop’s general focus. Two stages of critical review ‒ at mid-week and at the end of the workshop ‒ will be performed by Turin-based architects, historians and critics.

MOLZILLA! is open to students, newly graduates and young architects of any nationality. To register, fill in the online form [click here].

The organization will send a confirmation email upon receipt of the registration form. The deadline for registration to MOLZILLA! is Monday, September 15, 2014.

There are two fees:

Should the number of applications exceed the maximum of 16 participants, the organization will select the participants based on their portfolios, and communicate the results in the days immediately following the registration deadline. The fees paid by rejected candidates will be entirely refunded.

The workshop will take place in Turin, from saturday, september 27, to friday, october 3, 2014. The project’s activities will take place at Pla(TO) Piattaforma Culturale, in via Parma 26. 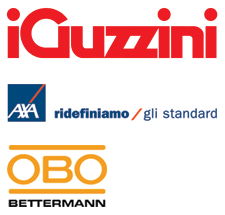 Download the pdf brochure of the workshop MOLZILLA!
Write us at: associazione@zeroundicipiu.it 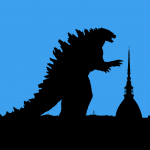 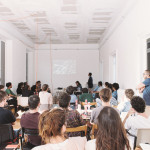