Activism at Home: Architects’ own houses as sites of resistance 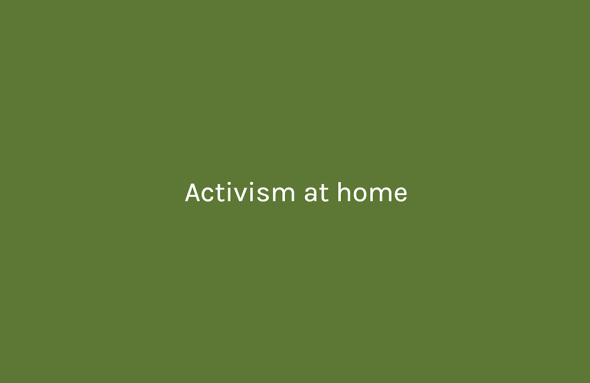 Architects are, on the whole, idealistic people. Many of them believe that better buildings will make better lives for the people who live and work in them. Architects’ own homes embody their real passions, on a scale which is comprehensible.

With this statement Miranda H. Newton challenges, in her 1992 book Architects’ London Houses. The Home of Thirty Architects since the 1930s (p. viii), the mockery by certain critics, including architect Léon Krier, of architects’ distinction between their experimental creations for others, and their own homes. A long tradition indeed exists of architects designing experimental houses for themselves. Frank Lloyd Wright’s Taliesin homes and Frank Gehry’s exploded bungalow in Santa Monica, are well known examples from the US and find British counterparts in Walter Segal’s double house, Neave Brown’s terrace of five houses at Winscombe Street, and Michael and Patty Hopkins ‘high-tech’ house. All these examples demonstrate how architects challenged (or resisted) accepted forms and practices within the discipline of architecture through the design of their own home.

With this symposium, we are looking for examples of architects’ own houses that not only aimed to challenge the status quo within the discipline, but also articulated broader social, political and cultural critiques. We seek to explore how the unique set of conditions typical of an architect’s own home, allows for different, perhaps more radical, forms of experiment in living than is possible through commissioned work. The architect’s own home is hereto instructive because it intensifies several tensions that are present in the practice of architecture in general. In their own house, where the architect operates as designer and user, aesthetic objectives, ideology, and the promotion of the architect’s business become inseparably entwined with the personal. Acknowledging that many architects see themselves as social engineers, the architect’s own home invites to unpack the complex entanglement between resistance, experimentation, aesthetics, marketing, and living.

This symposium follows on from the “Private Virtues or Vices? Architects in Search of an Aesthetics of Resistance” symposium, which took place at the University of Queensland (Australia), in July 2017. In the forthcoming symposium in Manchester we seek to focus on two tensions in particular: The tensions that the desire for (radical) experimentation versus the quest for commissions generates, and, secondly, the tension that is produced by the architect assuming a double role, as both the designer and client / inhabitant of the house. We welcome papers that explore such tensions through case studies, preferably but not solely architects’ houses that have not yet been ‘canonised’ and clearly demonstrate how a socio-political statement is expressed through the design of the (personal) home.

This symposium will take place at the University of Manchester on 15-16 January 2018.